Just returned from my travels across the USA and the UK. A week in New Orleans was quickly followed by a Greyhound bus to Memphis Tenn. Why? Because I wanted to see the backblocks of the deep south without having to drive, and more importantly, I wanted to have my photo taken outside the legendary Stax Recording Studios in McElmore Avenue. Home of Otis Redding, Booker T & the MG’s, Sam & Dave,Staples Singers Isaac Hayes and countless other stars. Then disaster! The museum, I discovered via the web, was closed while I was there. So, I contacted them and begged. Lisa, the manager of the venue waited until we arrived on a sultry dark Wednesday night, and gave us 2 hours of exclusive access to Soulsville USA. And I had the picture I dreamed of getting since I was 15 years old. Can you imagine that happening anywhere else? Memphis, by the way, is a music lover’s fantasy. Sun Studios where Elvis , Johnny Cash, Jerry Lee all recorded; Hi Studios, where Al Green laid down his greatest tracks; Stax, and the Museum of Rythym and Blues, and of course, Graceland. Go there, the locals are lovely. 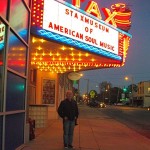 by expDNA / in Uncategorized / No Comments on Dream Fulfilled Read more